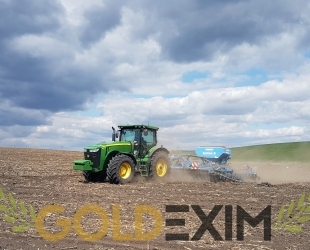 The structure of crops that have been sown in 2020:

• soybeans - 237 thousand hectares out of an estimated 1.4 million hectares.

The average air temperature in Ukraine in January 2020 was 3-5 degrees higher than in January 2019. Precipitation throughout January 2020 was lower than in the corresponding period of 2019. Based on this data and analyzing 2015-2019 metrics it is clear that soil moisture is currently in critical condition. For the past couple of years winter sharply turns into summer. There is a lack of moisture in the arable soils, which is observed even in the western regions, where traditionally similar problems have not occurred.

According to the adjusted forecasts of the Ministry for Development of Economy, Trade and Agriculture in 2020, due to lack of moisture and economic factors caused by the COVID-19 pandemic, farmers will harvest 60 million tonnes of grain and leguminous crops.

Modern Ukrainian farmers are increasingly adapting a set of basic agricultural crops and, consequently, crop rotation to market conditions. Preference here will be given to those crops that have relatively higher profitability, such as beans.