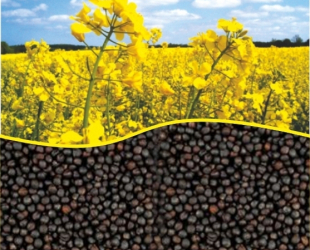 Rapeseed oil is good for cooking and has many benefits for our health. It is an exceptional antioxidant, protects our skin and stabilizes heart rate due to its low saturated fats inclusion. Rapeseed oil can be used as diesel fuel, biodiesel—straight or blended with petroleum distillates, as well as for the production of hydraulic fluids and plastics and a biolubricant for bio-medical applications. Erucic acid, contained in rapeseed, is mainly used in environments where high thermal stability is required.

The United States Department of Agriculture (USDA) estimates that the world production of rapeseed in 2021/2022 will be a little higher than 72.1 million metric tons which is 1.4 million tons less than it was in 2020/2021 market year. This year's crop will most probably represent a decrease of 0.98% in rapeseed production around the globe due to weather conditions and market situation.

The latest USDA data show that current rapeseed production by country in a million metric tons has a following disposition — The World's Top Rapeseed Producing Countries:

The global rapeseed production is projected to increase by more than 8 million metric tons or 11% in 2022/23 marketing year.

The EU’s largest producers France and Germany will lower rapeseed production due to dryness which will affect production in Poland, and Czech Republic.

According to the United States Department of Agriculture the total rapeseed export has increased by more than 45%. When it comes to rapeseed oil and its exports it has skyrocketed by nearly 90%.

The 5 world's largest rapeseed exporters are Canada, EU, China, Australia and Ukraine. The EU countries, China and Japan are among the biggest importers on the market.

Cultivation and export of rapeseed in Ukraine in 2022

Rapeseed production in Ukraine has been on the same level since 2008.  Almost all volumes of rapeseeds produced in Ukraine, which is around 85%, are exported.This is explained by the importance of rapeseed oil for both the food and fuel industries of the world. The main export direction is mainly the EU countries such as Germany, Belgium, France, the Netherlands, Portugal and other countries.

The war in Ukraine started by russia has already limited Ukraine’s export capabilities significantly. In particular export volumes have been capped noticeably since the beginning of russia's invasion and the blockage of Ukrainian Black Sea ports. For example, Ukraine normally and regularly exported millions tons of bulk commodities such as sunflower seed, rapeseed and wheat, however since the beginning of this war, these volumes have been exported only sporadically. However, Ukrainian business was able to find some ways out and is still supplying goods to Bulgaria, Turkey, Lithuania, Latvia, Romania, Germany, even though volumes are much lower. Here at Gold Exim we manage to supply our products without delays and within the agreed terms.

Prices are projected to register an annual growth rate of over 3% during the next 3-5 years due to growing demand, increased industrial consumption and transportation crisis.